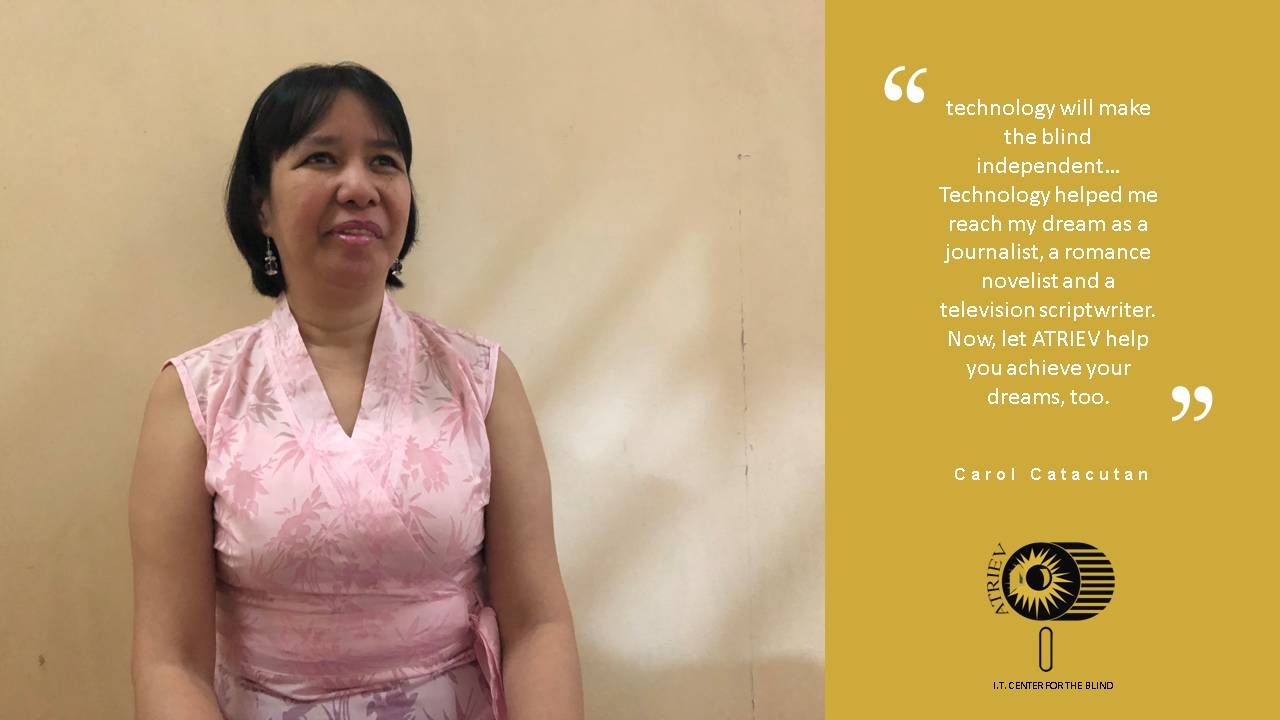 by Carol Catacutan, ATRIEV’s Chief of Operations and founding member

It’s happening…the blind can be call center agents, virtual assistants, transcriptionists and blog writers because of technology. Nowadays, computers easily translate every keystroke and screen change into speech. ATRIEV, the IT Center for the blind, started it all in the Philippines in 1999.

Unwittingly, I am one of the founders that made ATRIEV a reality. Before we started, I was skeptical about how technology can significantly make the blind independent. I studied in a mainstream high school and college and this meant my dependence on my mom to read the books to me, on my classmates to read the notes on the board to me, and on my typewriter to write down my answers to my exams. Yes, I survived but with a lot of help.

So, when my blind friends introduced to me a computer that allowed me to listen to my keystroke as I type and read back what I have written, I knew that this time, I can pursue my dream of being a journalist.

Burning with the desire to learn the technology, I joined ATRIEV’s experimental computer training for its four blind founding members in 1996. We brought our desktop computers to UST Pediatrics Foundation where the training first was held. We used a hardware sound card inserted in the CPU and an external speaker to use a program that will translate text to speech. We learned to use a word processing software, a computing software and a database software. I was truly amazed. With a computer, I can easily write and edit my work. In no time, I finished my first book, a romance novel entitled “My Special Friend,” taken after my first love, and then wrote my life story in a teleplay for “Maalaala Mo Kaya” entitled “Liwanag” where Claudine Baretto played my part. I even brought my talking computer to the television shoot so that I can edit my script on the spot!

In 1999, my magazine article brought ATRIEV to life. I wrote a feature article about the life story of Tony Llanes, the blind person who had a vision about ATRIEV, the very first blind person who believed that the blind can use computers. Tony’s life story landed as the cover story of Sunday Inquirer Magazine. Because of its wide circulation, ATRIEV was introduced to STI, one of the leading IT school in the Philippines. Together, ATRIEV and STI launched the very first computer training for 10 blind persons. To this day, ATRIEV continues to provide training to hundreds of blind persons all over the Philippines. We have produced the first blind software analyst, the first blind programmer and the first blind college instructor.

Technology helped me reach my dream as a journalist, a romance novelist and a television scriptwriter. Now, let ATRIEV help you achieve your dreams, too. Who knows, you can be the first blind app developer of our country.