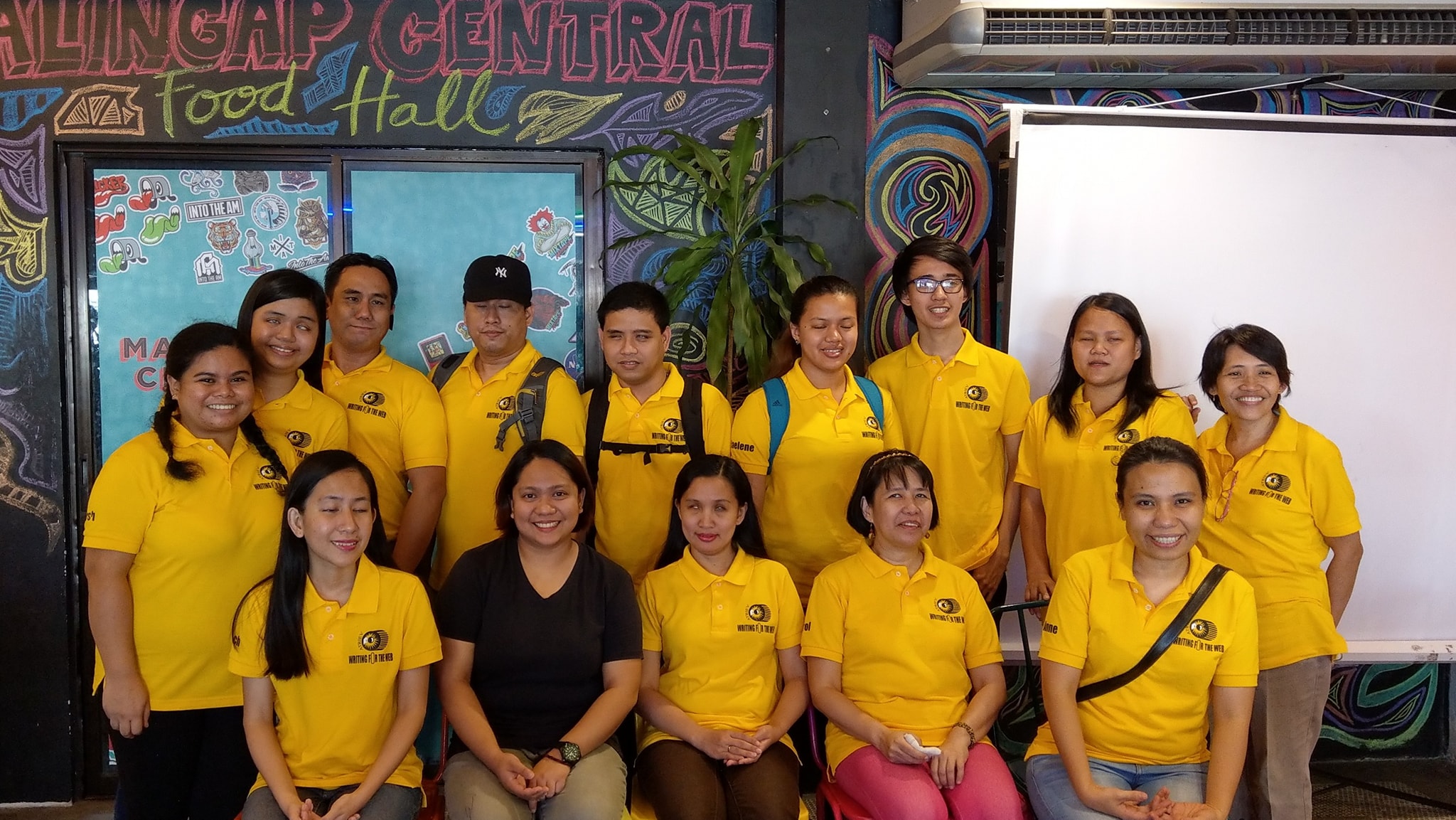 Food crawl: the culminating activity for the “Writing for the Web” training. The mere mention of “food” sent the whole class in a frenzy. But then, there’s this other word, “crawl”. Banded together, what do these words mean? Nope, I won’t give you its definition, Google can help you with that. Rather, I would share with you our experience…..

The class (all twelve of us), led by our trainor, Ms. Anne Quintos, left ATRIEV IT Center for the Blind around 11 am. The original plan was for us to ride on the open cargo section of Ms. Anne’s pickup truck, wearing our yellow “ATRIEV Writing4Web” shirts (compliments of Sir Remir – thanks!) waving to the crowd, feeling very much like election candidates filing our COC’s. But we couldn’t run the risk of being apprehended by cops, so we just traveled in three groups via Grab.

Our first stop was at SGD Coffee in Maalalahanin St., Teacher’s Village. The place is ideal if you go for peaceful ambience while using your laptops for who-knows-what, while sipping the rich, flavorful, home-grown Sagada coffee. According to Mr. Zoe Lim, Head Roaster of SGD Coffee, its name and logo came from Sagada, Mountain Province, where they source their coffee beans. Their CSR is to help the Sagada coffee farmers: from planting, harvesting and eventually, marketing/buying their produce while at the same time, preserving their heritage. In fact, SGD Coffee has won an international award in Paris last year for its home-grown coffee, “roasted and blended in its country of origin”. We had the pleasure of tasting their coffee-marinated adobo with brown rice and Etag Carbonara. Of course, the meal would not be complete without their famous coffee: black sans sugar, in order to fully appreciate its flavor.

Next stop was the Malingap Central Food Hall, about 100 meters or so away, at yes, you got it right, Malingap St. As the name suggests, Malingap Central Food Hall is composed of around 10 food stalls, all offering different kinds of cuisine: American, Mexican, Thai, Korean, Japanese and Filipino. What sets it apart from your run-of-the-mill food hubs is, first, it is covered, thus protected from the elements; and second, the food hall is envisioned by its manager, Ms. Rose Calla, as an events place to hold your symposia, fora, product launches, etc. in an informal and vibrant setting. Not to mention their wide variety of food choices: we were fortunate to sample their nachos, takoyaki, chap chae, fish & chips, pad thai, lasagna and camote fries. But most importantly, the establishment is PWD-friendly – it even has ramps leading to the comfort rooms.

Our last stop was at Catabolic Cafe, also along Malingap St. You might be wondering, how can we possibly stuff all those food into our tummies? Well, it helped that these restos are around 50-100 meters apart, so walking from one place to the next gave us a chance to “magpababa ng kinain”. We were greeted by Sir Christian, who was kept busy by our endless requests. Good thing we were the only patrons, as it was already 2:00 in the afternoon. The place is cozy, its interiors oozing with millenial vibe. Initially, the owners wanted to name the place “Catalyst”and by then, even had a logo for it. But they discovered that there’s already an enterprise bearing the same name, so they had to think of another name that could use the same logo. So they decided on the name “catabolic” instead, which means the breaking down of food to release energy. Since it was our last stop, we indulged on their desserts: large servings of bibingka waffle, grilled cheese & chips and fudgy brownies! Mmmmmmm!

A big THANKS to Ms. Anne, who planned and sponsored the whole adventure. After this experience, the concept of food crawl took a whole new dimension: it meant not just looking for a place to eat based on the menu or the ambience it imparts, but to go deeper and know the concept behind it, because each cafe or restaurant has a unique story to tell.