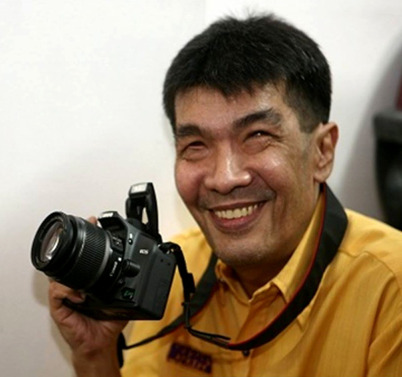 Pastor Tony, born half-seeing or with a low vision 51 one years ago, pulls no punches. Here is a man who experienced the worst of life’s ills—none of them in the same league as simply being called blind.

Before he totally lost his sight, he could see shapes and colors, and could read newspaper headlines. To read the news stories in smaller fonts, all he had to do was bring the surface of the paper to his face. “I was as functional as the next guy. I could do anything and everything on my own, including traveling in public conveyances,” he says proudly.

Blindness is a genetic issue in Pastor Tony’s family. They are five siblings and four of them had low vision at birth.

As a child, Pastor Tony’s vision was as weak as his ambition was wild. “The wonders of science and technology captivated me. One of my dreams was—I’ll design the world’s most powerful computer that could be accessed by mental thought projection.”

At age five, Pastor Tony fabricated his own DC-powered electric motor. He pictured himself as a quantum physicist, or an electronics and communication engineer, or even an astronaut.  “My curiosity for elementary particles and their properties was exceedingly rapt,” he adds.

“Growing up and going to school were a series of frustrations,” Pastor Tony relates. “My classmates were indifferent, my teachers were impatient, and my grades were insignificant. I experimented with many isms and esoteric philosophies—occult, yoga, The Talmud, you name it.  I moved from school to school and my bitterness worsened with every change.”

His sight and his future grew dimmer as well. His older sister encouraged him to enroll at the Philippine Christian University—the only school which took him in.  It was here where Pastor Tony’s life began to change.

He enrolled in AB Psychology because he wanted to understand himself better. To ease his loneliness, he joined the Inter-Varsity Christian Fellowship. He would hear them singing gospel songs and they sounded like people of hope. Aside from being happy with their lives, the members welcomed this partially-blind hope-seeker with open arms.

“In this setting and with this group, I discovered hope. Jesus found me. I received Him as my personal Lord and Savior. It was incredible—the changes that happened in my heart!”

He resolved to enroll in biblical and church-related courses—21 units in all. And shortly after that, to everyone’s disapproval and disgust, he moved to the Union Theological Seminary to take up a four-year course in Bachelor of Theology. For him, it was the only way to go, although an extremely difficult one. Because of his impairment, which was perceived as impediment to serving God well, full time, he was denied a scholarship.

On his own, he slogged along. “Only the Lord knows how I survived that first year,” he says when pressed how he managed. On his second year, he was given a scholarship by the Women’s Circle of the Cosmopolitan Church where he was working as a student Pastor.

Finally, it was time for internship.  Again because of his handicap, every church he ever applied to either ignored or rejected him. “But as sure as God’s promises, one said, yes!” It was a small church in a remote rural area.

It was during Pastor Tony’s internship in this church that he graduated and was ordained as a Minister.  “I never thought that one day I would offer my life to the Lord in full-time service,” he said with effusive joy.

It was also in that teeny church where two of the most important things in his life happened.

One, he lost totally lost his sight.

Two, he married Eunecy “Necy” Mendoza—also a church worker in another church; and with whom he now shares four beautiful children:  Eunice Rosabel , Hezron Elohim, Onycha Shalem, and Zina Shelomi.

“What was it like losing your sight?” I bravely ask. “Was it instant?”

“It must have been like a flickering light suddenly snuffed out,” he explains patiently. “But I didn’t know that then. I could still see images.  Yet I was bumping into things—sometimes sharp objects. Many times I had close calls in the highway and even indoors.  I couldn’t understand why!”

When he realized he was totally blind, Pastor Tony—together with his family—continued serving God as pastor for another 12 years in different churches and was ordained minister of the Greater Manila Conference (now known as the Lowland Cavite South Manila Conference),  United Church of Christ in the Philippines.

In those twelve years, his incapacity to see with his eyes and do a pastor’s job drastically reduced his opportunities to earn enough for a growing family.  “But Necy stuck with me,” he beams. “I saw many things through her eyes.”

Pastor Tony also re-discovered the limitless potentials of the passion of his youth—information technology—from Randy Weiser, one of the early leaders of the Resources for the Blind (also producer of Braille Bible for the Blind). From Mr. Weiser, Pastor Tony learned that a blind person can have access to a computer using a voice synthesizer. “I immediately enrolled at the Hadley School for the Blind and took up a correspondence course: Introduction to Micro Computers and Micro Computers and careers. To fend for my family and my schooling expenses, I repaired flat irons, electric fans, television and radio sets, organs, pump boats, vacuum cleaners, etc. etc.”

As an unexpected bonus, his mother bought him a talking computer which facilitated his training. After receiving his certificate of completion, Pastor Tony enrolled at STI so he could have a diploma.  That was a cinch for this emerging computer wizard who was now irreversibly drawn to the sector which shared his impairment. Raring to impart his new expertise, he found his way to the Katipunan ng mga Maykapansanan sa Pilipinas, Inc. (KAMPI) where he became an active member.

“I wanted so much to teach my blind friends the computer technology which I now knew by heart. So I started conducting computer training in my own backyard,” he enthuses, vividly painting the teacher-students scenes for me. Soon after his friends imbibed what Tony knew, they pooled their computers together and encouraged more and more blind people to come and train.

In 1999, the informal organization composed of a handful of blind friends was turned into an organization to institutionalize it. Its long name—Adaptive Technology for the Rehabilitation, Integration and Empowerment of the Visually Impaired Incorporated (ATRIEV), has been shortened to a nickname by those who are familiar with the organization: School for the Blind.

Over 500 visually handicapped have graduated from ATRIEV. Some went on to pursue higher education; some became transcriptionists, computer instructors, web designers, human resource personnel, researchers; and some chose to be entrepreneurs who create their own marketing and advertising materials based on their computer knowledge.

Like serendipity, I found Pastor Tony’s mission in the ATRIEV website.  And I find him in person at the ATRIEV office where he encourages me to look around. I am amazed to watch almost two dozen people either working in the office or having lessons before talking computers.  Many of them have their faces one inch away from the monitor, and some listen intently to the audio. They have one thing in common—and it’s not the partial or total absence of sight. It’s the fulfillment of ATRIEV’S vision: to develop and promote information technology to uplift the living conditions of people with visual impairment.

“ATRIEV is now running smoothly with 10 staff members and teachers and with partners providing the needed funding. So what’s next for this organization?”

“You mean this organization for the blind with vision?” he asks facetiously. Then he pauses for what seems like eternity. “I want to train someone to take my place. I want to go back to serving God as a full-time pastor.”

Go back to serving the One who could design the most powerful computer that could be accessed by mental thought projection, I thought, borrowing Pastor Tony’s own words.

But Now I See, Excerpt from the book “Flying on Broken Wings” By  Ms. Grace Chong, Palanca Awardee