Do you believe in surprises? Will you expect that your master can be your student? Have you tried teaching your teacher? That is quite rare, isn’t it? But that is the story that I’m going to share.
When I was younger, teaching was not really on the list of my chosen careers. I imagined myself a fashion model, or a successful businesswoman or someone who works in an office. I never imagined myself as a teacher.
When I graduated from high school in 2009, and it was the time for me to enroll and choose a course to take, I was so undecided. So I went to Collegio de Dagupan,. As a totally blind person , I just took a course which I thought would work for me, and that was Business Administration, major in Human Resource Development.
In the first semester, I felt that I was not enjoying my course. I was not happy. So after a year in Business Administration, I decided to quit, and shifted to Education, in the same school.
Just like Business Administration, Education was not really my chosen course to take that time. I just agreed to take it because I didn’t have a choice. So I took up Education, major in Special Education (SPED).
One of my instructors was Sir Jesse P. Ordoñez. He handled my Introduction to SPED subject in my first semester in Education, and he became my instructor in all my SPED subjects, and some of my Professional Education subjects, from my first year to third year, in 2010 to 2014.
I remember him as a considerate, intelligent, soft-spoken, talented and understanding instructor, who was full of ideas and wit. I learned about so many things from Sir Jesse. He shared a lot of his experiences not only about special education, but also about the practices, strategies and the principles of education.
He did not just teach us to have a mind that understands, but to have a heart that beats for teaching. He also taught us to know our students very well, to cater to their needs, whether they have exceptionalities or not.
A few weeks after I graduated from college in April 2015, I became one of the trainees of ATRIEV to be a part of the training team. I’ve been working as an on-call trainer of ATRIEV until today. I’ve experienced handling both students and teachers in different communities.
In the Android Training for SPED Teachers conducted at UP Diliman from May 30 to June 3, 2016, I was so surprised to know that Sir Jesse was one of the trainees who participated in the training.
It was just a bit funny to realize that my former professor in college who taught me a lot of things about SPED and education, was to become one of my students. Of all people that I could think of who could be interested in the course, Sir Jesse was the least I expected. The moment I learned that he was one of the participants, I felt a little conscious, especially in the first few minutes during the orientation. But after some time standing in front and introducing the course and ATRIEV, I felt more relaxed and confident. At least, there would be something that my former professor could be proud of with me; that I’m now practicing what I learned from him as a mentor. I felt proud to let him witness my progress from school to my field.
During the introduction of participants, he told everyone that he was so amazed because he didn’t expect me, his former student in college, to be one of his instructors. He just felt so happy and proud to see me share my expertise in the use of Android devices as a tool for education, and enjoy my field in spreading the technology.
I felt so great to have Sir Jesse as one of my most wonderful teachers, and to have him as my student as well. It has been a once in a lifetime chance to teach my teacher, and to see him enjoy the whole training.
Sharing the knowledge and helping other teachers to make use of the technology to enhance the quality of education has been a great experience for me. It is so true that teaching is a lifetime mission to accomplish, and being a teacher is a noble job to have. 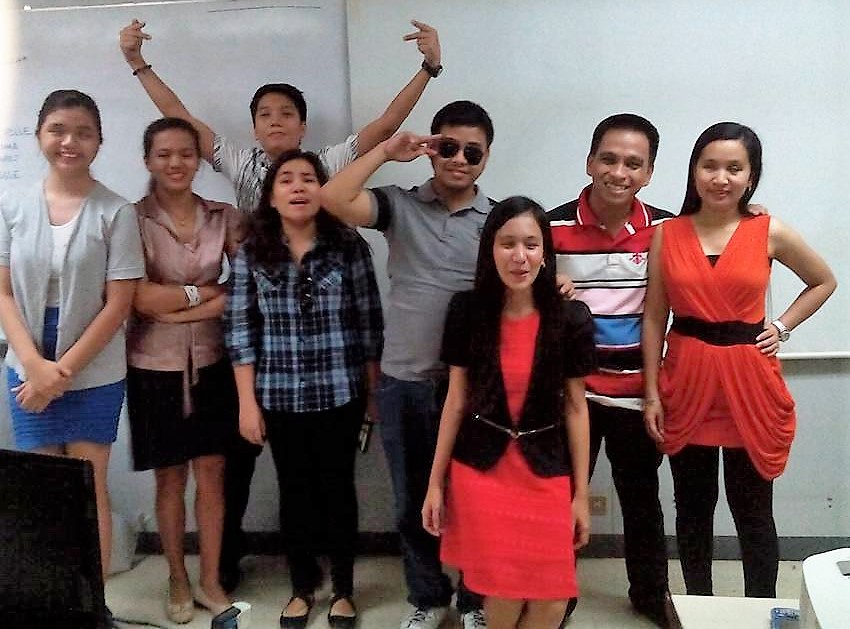 Michelle, front row, with other members of the ATRIEV training team

Ma’am Maria Caridad B. Monsayac also known as Ma’am Charet is a special education (SPED) teacher in Baliwag North Central School in Baliwag Bulacan. She has been teaching students with visual impairment for several years now. I met her in 2011 through my mom who is a principal in one of the schools in that municipality. My mother told her about my story and some of the difficulties that I encountered in my studies.
Upon knowing my situation, Ma’am Charet became interested to know more about me. I actually had a SPED teacher in our school at that time. She on the other hand was teaching several classes and had other responsibilities so she was often busy with her other students. She did not have enough time for our own schedule for SPED. This often caused difficulties on my part.
Because of this, my mom and I tried to ask Ma’am Charet and my former SPED teacher in elementary for advice on how I could study without depending much on the assistance of my SPED teacher. Ma’am Charet continued to help me until I graduated from high school in 2012.
My mother told her about my plan of pursuing my studies in college. Ma’am Charet volunteered to help us in inquiring about the entrance exam in Bulacan State University. She was the one who communicated with the admission office of the university and requested for a special exam. I took the exam together with her own student Julius. From then on, she kept herself updated of my standing in school by asking my mom. I sometimes visited her in school to talk about my experiences in the university as a college student, including my difficulties.
There was a time when I asked for her assistance for our group research on the experiences of blind students with regard to inclusion in a public school. She was the one who helped me look for respondents for that study. After that, I did not see her for some time because my mom was assigned to another school, in Calumpit Bulacan.
When the Basic ICT training for SPED teachers was held from May 30 –June 3, I did not have any idea that Ma’am Charet would be one of the participants until our team of ATRIEV trainers reached the training venue. She was the one who first noticed our arrival. She was so surprised as much as I was. She immediately asked me if I was one of the trainers of ATRIEV for the five-day seminar. When I said yes, it was evident in her reaction that she felt excited to see me again. She told me that she feels so happy and proud that now I am one of the teachers who will facilitate the training.

During the training, as I went around the room to observe the participants while they were doing the activities for the workshops, I often observed her taking pictures of me and uploading them on Facebook to tell her friends about her own experiences at the teacher’s training.
On the third day of the training, my mother went to Ma’am Charet’s school to attend an event. According to my mom, she excitedly and proudly told everyone that we met in the training and that I was one of the teachers who facilitated the training.
The most unforgettable experience that I had in the ICT training was the closing program. I sang a song which I dedicated to the participants. I said that the reason why I chose the song was to remind everyone that we as teachers play a big role in our students’ lives, just like what Ma’am Charet did. Her words of encouragement served as a driving force and inspiration for me to pursue my dream of becoming a successful teacher. I proudly say that Ma’am Charet is one of the people behind my success. I sincerely appreciate everything that she has done for me and I am so thankful for those.

Hannah: A Blind Girl Who Tweets

Carol Catacutan: Shining Light in a World of Darkness

Tony Llanes: But Now I See

Jo Olorocisimo: A Sight By Heart