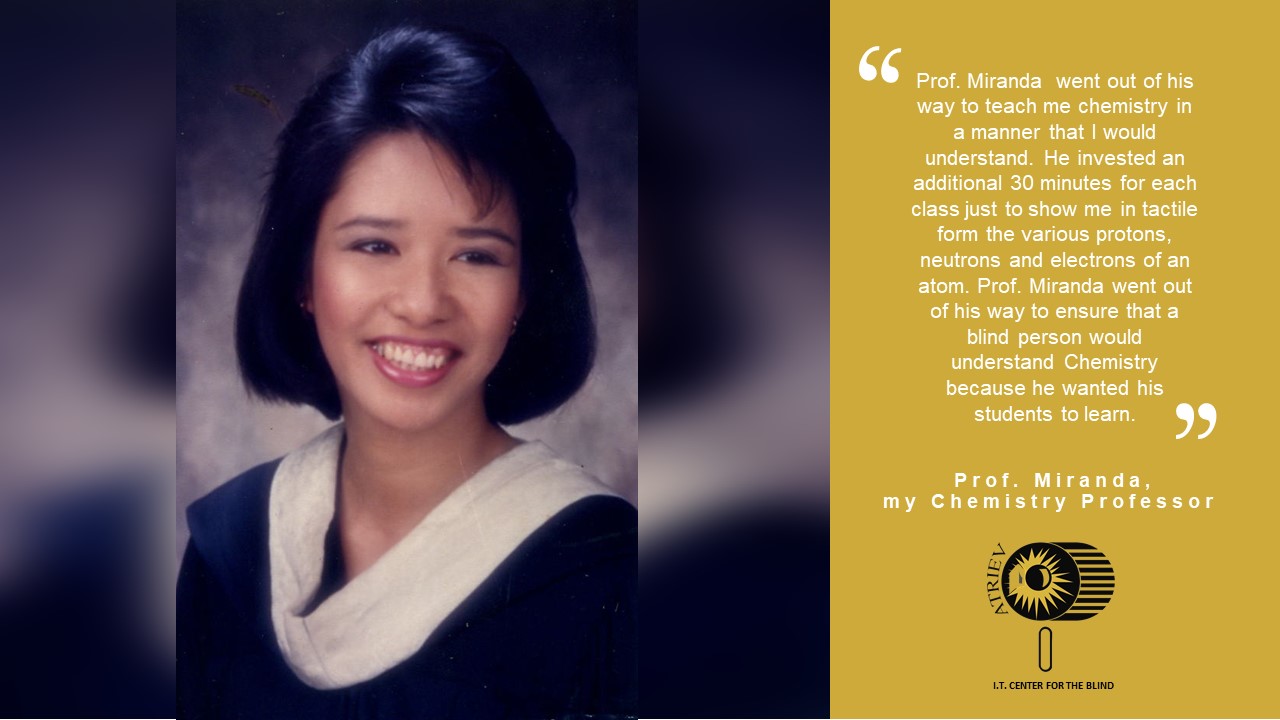 It was 9:30 Am and I am 30 minutes early for my Chemistry class. I was already a graduating student of AB European languages from the University of the Philippines but I needed to complete my general education subjects in Science.

I did not go straight to my classroom on the second floor. Instead, I went straight to Prof. Bienvenido Miranda’s room on the ground floor of the Science Faculty Center.

Prof Miranda, already in his late 60s, was already in his room waiting for me. His wife, also a UP Professor, readily assisted me and led me to a chair. After I was comfortably seated, Prof. Miranda led my hand to touch several steel wires and different sizes of plastic balls arranged on top of a wooden board. He carefully led my hand to touch each set of plastic balls connected by wires. In between the plastic balls were lumps of cotton. The balls, wires, and cotton represent the four patterns of electron configuration namely S, P, D, and F. At the center of the board was the biggest ball representing the nucleus of an atom. Around the nucleus were smaller balls representing the protons and the same number of still smaller balls represent the electrons.

As my fingers trailed on the different plastic balls, Prof. Miranda patiently showed me the different patterns on how the electrons were arranged around the nucleus while the cotton the energy that binds one electron to another. He patiently showed me the S pattern, the P, Pattern, the D pattern and finally, the F pattern. All the electron configuration models were designed and customized for me by Prof. Miranda.

At 10:00 AM, my best friend, Jessica, picked me up from Prof. Miranda’s office and we went upstairs to our Chemistry class where we sat at the back. Minutes after, Prof. Miranda arrived in our room and started his lecture on the four types of electron configuration. As he pointed at every single pattern on the board, I already have the images inside my head. I need not strain my neck to look at the board because my eyes would not see them anyway. Only my hands can read the drawings because I’m totally blind.

Prof. out of his way to teach me chemistry in a manner that I would understand. He invested an additional 30 minutes for each class just to show me in tactile form the various protons, neutrons electrons of an atom. He did not provide me with the extra hours because the Science Department ordered him to do so. He did not spend extra time and money to construct all the models just because he had plenty of time to waste. Prof. Miranda went out of his way to ensure that a blind person would understand Chemistry because he wanted his students to learn.

On our mid-term exam, I was instructed to take my exam in Prof. Miranda’s room. Prof. Miranda prepared a pen and blue book for me. The blue book is laid on a wooden board with spikes on either side. Across the board was a plastic strip with two holes at either end for the spikes to pass through. As I move the plastic strip downward from spike to spike, the strip corresponds to every line on the blue book. Then, I took the pen. Prof. Miranda’s wife started reading the test questions to me. After each question, I wrote my answer on the blue book using a pen. As I write the letters, I trail my left hand on the plastic strip to ensure that my writing remains on a straight line. After one and a half hours, I finished my mid-term exam.

On the next meeting, Prof. Miranda announced the results of the mid-term exam. He said that the top scorer got 100 points. Oohs and Ahs filled the room. Then Prof. Miranda called Miss Catacutan. Everybody looked around, trying to identify who that was. I timidly stood up and Prof. Miranda said that I was the top scorer. At the end of the semester, I got a flat 1 for my Chemistry subject not because I’m a science genius but because of a teacher, a Prof. Miranda who embraced me as his student—not a student with limitation but as a person with potential.