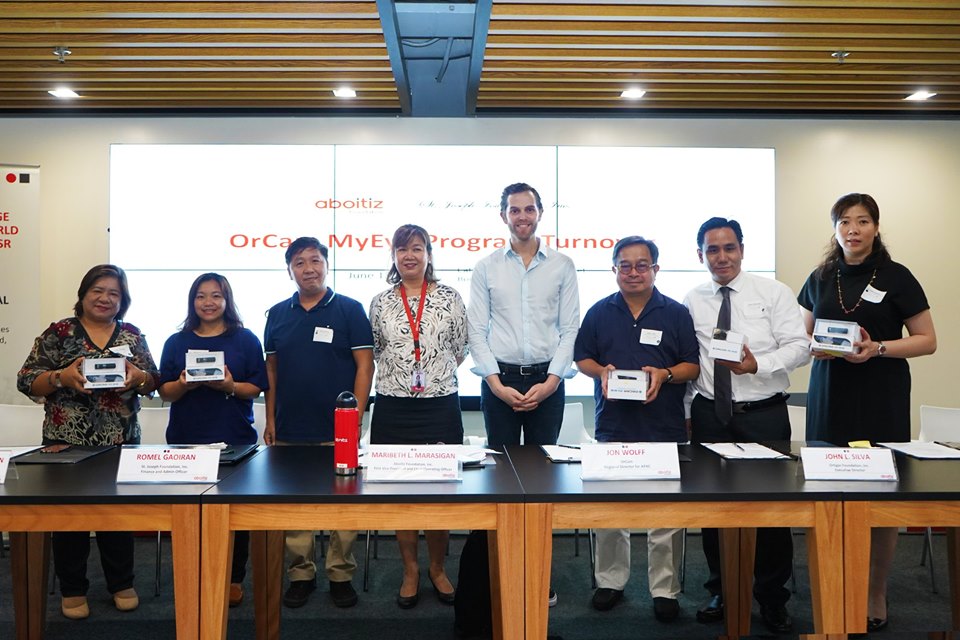 True to its name and slogan of “Creating vision beyond sight” – the Adaptive Technology for Rehabilitation, Integration and Empowerment of the Visually Impaired (ATRIEV) recently signed on June 13 a Memorandum of Agreement (MOA) to become one of the six organizations as beneficiaries of the 25 OrCam MyEye 2.0 from Aboitiz Group’s Corporate Social Responsibility program.

OrCam MyEye 2.0 is the world’s most advanced wearable assistive technology device, that increases the independence of people who are blind, visually impaired, or have reading difficulties through its tiny, intuitive smart camera. This powerful pocket computer, the size of a lipstick case, easily attaches magnetically onto the eyeglasses, uses Artificial Intelligence, that instantly reads text, recognizes faces, identifies products, bank notes, tells you the time, date, and more, just by pointing your finger, tapping the button on the side, or doing gestures. This is the same AI technology installed in smart cars or the Autonomous Vehicles.

The MOA with Aboitiz Foundation Inc. and St. Joseph Foundation Inc. entrusted five out of the twenty-five OrCam units to ATRIEV for the next two years. And this happened barely four months before the organization’s celebration of its 25th founding anniversary.

“OrCam will be very helpful to us. This will allow our trainers who are either blind or still with light perception to use the breakthrough device in their different community-based deployments in far-flung areas. Our trainers doesn’t only handle visually impaired people, but also sighted PWD trainees in these communities,” said Antonio D. Llanes Jr., Executive Director of ATRIEV who signed the MOA.

ATRIEV graduates, who are gainfully employed, and even students doing research and are running for academic top honors in the secondary and tertiary levels may also qualify to borrow this hi-tech device at the office from Program Coordinator Lourdes B. Borgonia. They must comply with all the requirements of the organization, which was duly approved by Aboitiz Foundation. Each borrower is only given a maximum of three months to use the device, based from ATRIEV’s Electronic Device Loan Agreement form.

“For those who are interested in borrowing OrCam from ATRIEV, we will soon be offering training to our pool of trainers and graduates, on how to use and take care of this very expensive, but highly advanced assistive device,” the founding father of ATRIEV added.

The 25 OrCam MyEye 2.0 assistive device that are strictly on loan to the six institutions serving the visually impaired will remain as the property of Aboitiz Foundation Inc., the social arm of Aboitiz group.

“The Aboitiz Foundation is pioneering an incredible initiative with OrCam’s breakthrough artificial vision technology. Meeting the recipient organizations and the wonderful team from ATRIEV was a critical part of what made the launch event and training successful, and very special. Everyone was kind, professional and a pleasure to work with. We’re excited and proud to launch OrCam’s assistive technology in the Philippines,” said Jon Wolff, OrCam Technologies Regional Director for Australia and Asia who demonstrated on how to use the wearable hi-tech device. 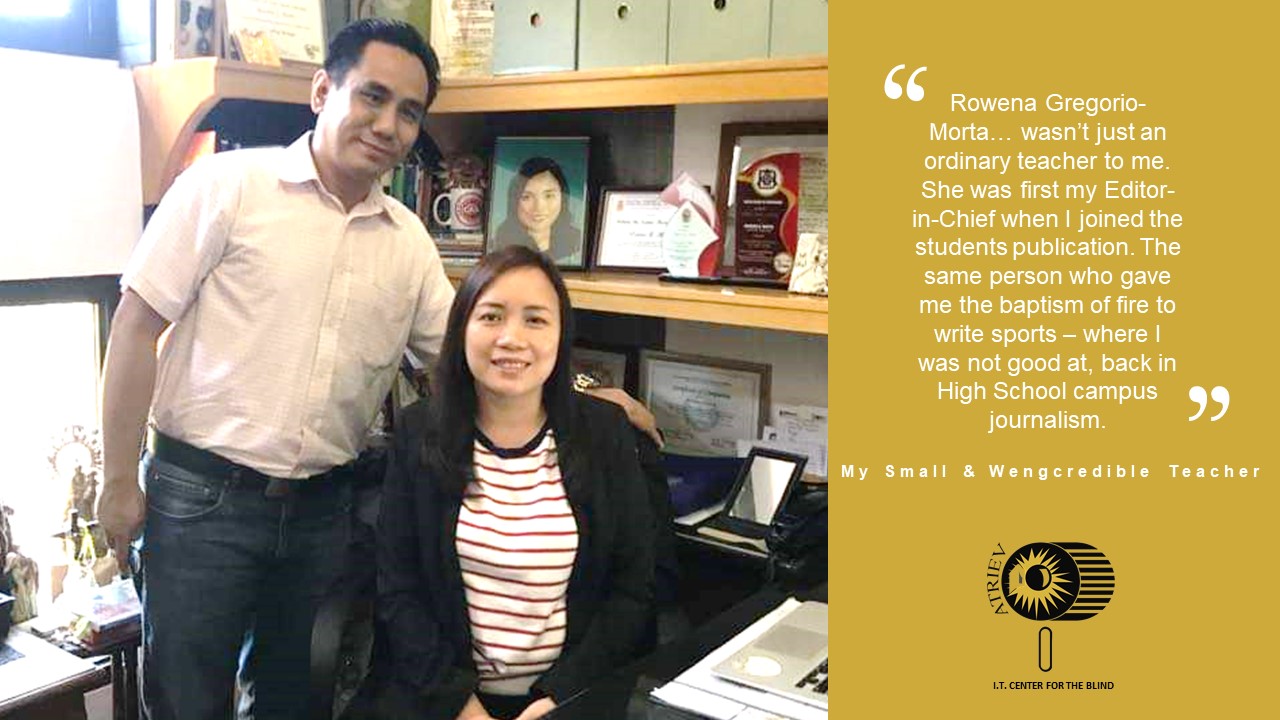 Charles F. Glassman once said, “A genuine teacher does not seek to impress you with their greatness, but instead to impress upon you that you possess the skills to discover your own”

Amidst the excitement and shrills of the crowd, this thought came to mind.

I was inside a jam-packed auditorium, not for anything else, but to watch the ALTA Media Icon Awards – the awarding of the students’ choice personalities in the field of television, radio, movies, social media, and music, featuring four short life documentaries, which included mine.

Just before my story was played on the video wall, one of the awardees for tv, dedicated his trophy to all the teachers. It was World Teacher’s Day that Friday. Then, it dawned me…

Oh my…. How could I ever forget the teacher who changed my life? The same person why my story is being featured that time!

Rowena Gregorio-Morta, now concurrent Communication Arts Department head and ALTACOMM Manager, wasn’t just an ordinary teacher to me. She was first my Editor-in-Chief when I joined the student publication. The same person who gave me the baptism of fire to write sports – where I was not good at, back in High School campus journalism. How could I forget it – running after the varsity team, waking up early in the morning to jog with them. My sports assignment actually made me sign up for the track and field team.

Thanks to the small but terrible Wengkie, as we fondly call her, the four sports articles she gave me and two news beat, became my stepping stone to broaden my writing. The next time I knew, I was already doing more than half of the sports page, with some news and feature write-ups in my first two semesters in college.

When she graduated that school year, I found myself appointed by the student publication adviser as Weng’s replacement as EIC for the next three school terms.

But it wasn’t the last time she would guide me. On my sophomore, she became the student publication adviser. And under her supervision, we were able to make some layout changes and active campus journalism. Not only that, I remember then Ms. Gregorio, assigning to me beats for “S – The Southpaper”, the community newspaper owned by the school president where she mans the desk. She was also instrumental in my Philippine Daily Inquirer stint Metro page, where I had the privileged to cover the Vizconde Massacre trial case.

The funny, yet unforgettable memory I had with her, however, was not about academics, campus journalism, or our part-time newspaper work. It happened in my very first NCAA coverage with her in July of 1994.

How could anyone miss that scene, when after the coverage, we, along five others, went window-shopping from Araneta Coliseum to Alimall to SM Cubao – and for some reason, she with three other senior staff, intentionally or unintentionally left me and two other junior reporters, one after the other. And just like a lost sheep for the first time in an unfamiliar place. I had to learn how to go home on my own from Cubao to Las Piñas through the largest parking lot in the country – traffic-congested EDSA!

Thanks again to Ma’am Gregorio. And because she meant so much to me as a friend and teacher – I formally made our ties closer when I made her godmother to my eldest son. And what is the best place to do the reception? SM Cubao, of course – where she left but “taught” me to commute six cities away from Las Piñas!

What an odd time to be reminded of this… The Teacher who changed my life… Thank you Wengkie!