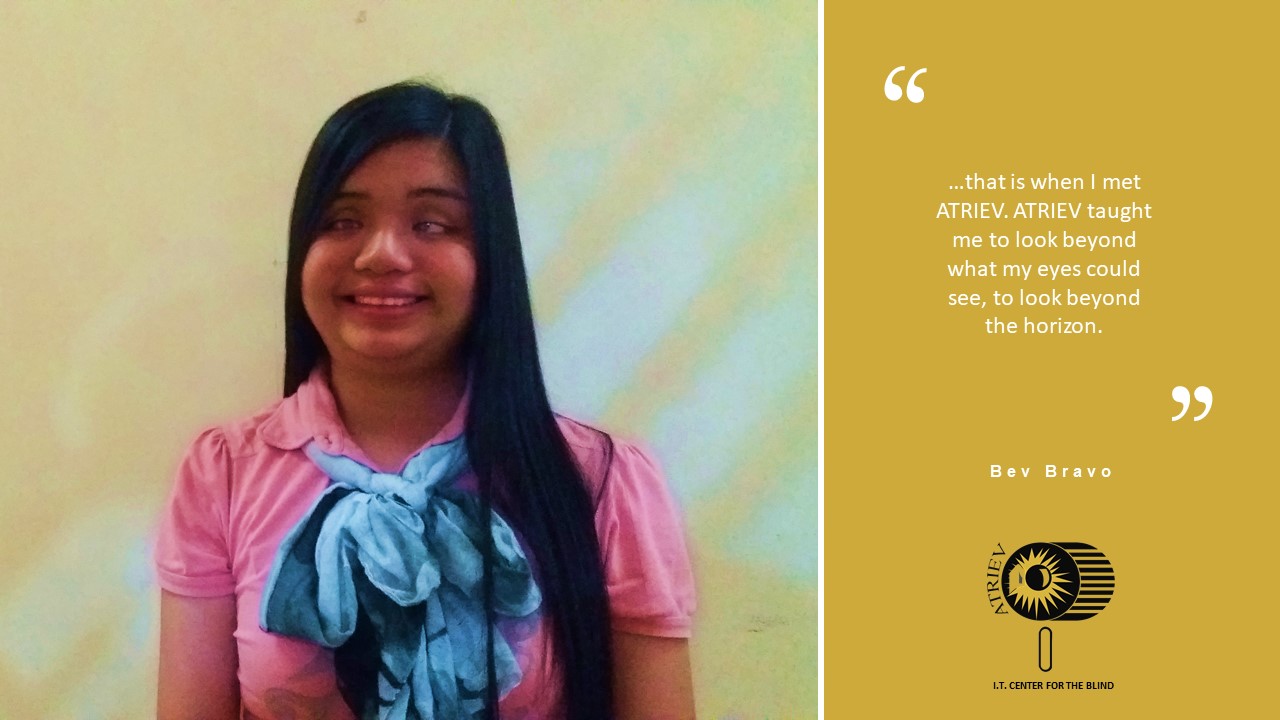 by Beverly Bravo, ATRIEV Trainer since 2015

A long time ago, people thought that the world was flat. That when you reach the end of the world, you’ll fall.

In my world, that’s also what I thought before I met  ATRIEV. I thought the world was just from our house to the wide playground of our school. My mother enrolled me in a school where there was a Special Education class, and I thought it would be fun. I always envied my cousins for going to school every day so I asked my mother if I could also go to school. At first, she was hesitant but a friend told her about a school that accepts visually impaired people like me. The next thing I knew, my teachers recommended me to go to the mainstream class. They believed I had the potential to study in a class full of students with normal vision. It was hard to cope in the beginning but eventually, I was able to perform better.

One morning, my SpEd teachers received a mail through a fax machine. It was from an organization that helps visually impaired in terms of assistive tools. The mail was an invitation for a computer training for kids organized by a non-government organization that advocates computer literacy training for the visually impaired. They told me about it, and the idea of me using a computer made me ecstatic. I had imagined a bunch of scenarios in my head: me as speed typist, me playing games while eating potato chips, and me reading an article on the screen wearing glasses. I never heard a blind using a computer so the idea really amazed me.

The training went on and it was overwhelming and, at the same time, thrilling. I met a lot of other visually impaired people, but unlike me, they were exposed to the blind community. I was already in fourth grade but I only know two visually impaired people, both my classmate in preparatory class. I have no idea how the blind use a computer and even a cellphone.  ATRIEV opened my eyes to numerous possibilities.

I graduated from that training. I learned how to type in Microsoft Word and present using Microsoft PowerPoint. I was exposed to public speaking at a very young age. I was given the opportunity to present in different places on how visually impaired uses a computer.

My journey did not stop there. Three years ago I became part of the organization’s training team. It was one of the best gifts I have ever received. I was able to teach other visually impaired how to use a computer and also inspired them to dream. I was able to go to different places and even ride on an airplane. That’s when I realized that the world is bigger than I thought, that there is life beyond our house and our school. That there’s so much to explore. ATRIEV taught me to look beyond what my eyes could see, to look beyond the horizon.

One thought on “ATRIEV Opened My Eyes to Possibilities”